Skip to content
Home/Events/Why do The Worst Nights Make for the Funniest Memories? (+Comedy Writing Wksp)

Why do The Worst Nights Make for the Funniest Memories? (+Comedy Writing Wksp)

About 18 years ago, I got hired by a third cousin twice removed to do a holiday party for a paving company.  It was my anniversary, so David said, “Let’s go for dinner first, and then I will watch the show.”

When we arrived it was only 5:30, but the gang outside were so drunk they couldn’t stand. Then we had to go through dinner and door prizes. They also had safety prizes: I knew it was bad when they wouldn’t go up for their leather jackets. After this, the guy who’d hired me said, “Don’t rip us off. The comic we had last year gave us only 40 minutes! Give us an hour!” Then he handed me the cheque.

Always get the cheque before you go on stage.

I turned to David and said, “Get in the car, go to the bank, put this in my account, and stay outside with the motor running.”

When I got up to the front of the room, I realized there was no light on stage. Now, this would have been fine if they couldn’t see me. But I could still see them. I saw every single one of their simpleton, slack-jawed faces. Women with hairdos that hadn’t been changed since the ’80s.

The other half were so drunk that they’d hate a woman speaking at all, let alone speaking onstage.

I was about 20 minutes in, and I wasn’t getting a laugh. NOT a peep. One guy, the ringleader, got up and said, “The broad thinks she’s hot shit. She ain’t!” Then he got up and a group of sycophants followed him out to drink some more while the remaining slack-jawed couples stared as if it was my fault the men left so unhappy.

As I looked out at the American Gothic painting staring back at me, something in me snapped: “Well if you aren’t going to co-operate, I am doing the full hour.”

I slowed down and just took my time. Had a sip of water in between each joke. I even did my famous spit-take, and the water dribbled down my chest as the set slowed to a crawl. Time is a funny thing. It’s funny how slow it can go onstage. I had so much time, my life didn’t just flash before my eyes – my whole family’s lives did. And the more the smell of death increased, the funnier I found it. I had staged a dance break in the middle. Normally if I was having a bad set, I left myself the option to cut the dance. But if they weren’t going to laugh. I was going to do the mashed potato.

Squirm all you like, people, you are getting the whole enchilada. 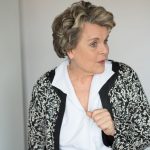 I signaled to the DJ and Bob Seeger’s Old Time Rock and Roll pumped through the speakers. As I danced through the audience, the DJ turned on the disco ball. It must have been a scientific anomaly that not one person tried to tap afoot. David stood at the bar chugging diet Cokes, miming a throat-cutting motion for me to get off the stage.

Even the bartender was mortified, which is saying something given the crowd.

But I did my 60 minutes just like Dan Rather and Leslie Stahl. The clock ticked down. And then I walked to the back, of the room, past David, grabbed my coat, and got in the car. David got in and put the key in the ignition.

“We didn’t even say good-bye.”

“After you commit a crime, never look back at the scene.”

As we drove down the highway, every 15 km or so David would scream out in horror, “GOD, that was soooo bad!” Then we would laugh hysterically.

15 years after our divorce, we still laugh and think it was one of the best anniversaries we ever had. And as for the third cousin twice removed? Well, he hasn’t been in touch since. But the cheque cleared, and my two wee bairns had Christmas presents that year.

Do you like my blogs? If they make you smile and you are able, consider a donation to the tip jar.

SOME GOOD NEWS FOR A CHANGE:

My last writing workshop for 2020 is this Sunday, November 22nd! It’s going to be fun and a lot of laughs. We have two spots laughed!! Or do I mean left?  CLICK HERE

My comedy CD Downward Facing Broad is streaming on ITUNES, and on SIRIUS radio across the U.S. It’s number 5 on ITUNES in Canada.

My play A Woman of No Fixed Address, a play about being under-sheltered in small-town, Ontario was given a humble Ontario Arts Council grant. This means I can spend my time re-writing this winter.

Windowshopping for God is being edited AGAIN in December. Thanks to all you who are my patrons and help me with the tip jar, as it facilitates creativity!