Skip to content
Home/Events/What Would Happen if a Comic Had A Cappuccino With God?

What Would Happen if a Comic Had A Cappuccino With God?

This chapter is from my newly written book, Windowshopping for God. Please check it out!

When we couldn’t understand why we were going through the challenges life brought, my friend Gina and I would say, “We will have to discuss that when we have our cappuccino with God.”

Why did I not get that job I wanted? How come I’m always broke? How come the guys we liked never called us back?

If you could have a cappuccino with God, you’d have a few questions about this life. Sure, you’d ask about why there was war and poverty and genocides?

But on a first date, you really would want to ask about some of the stuff that went on with you personally.

The way I imagine it, God and I would meet in a trendy coffee shop with cold brew coffee. Even though I think God might look like Lenoard Cohen-who’d ride a bike and wear a nice suit every day of the week, in this scene I’d keep God off-camera. No point in people getting worked up about what gender God might be. Let God be a little mysterious, like Sia, the musician who sings with her back to the audience and a giant wig covering her face.

Now, like any first date, you’d need to lead with some inane commentary. You don’t want to jump in and layout your crazy, not right off the bat. You’d have to start with some party prattle.

Innocuous questions: “Who was the hairdresser that came up with the mullet?” “What is the purpose of deer flies?” “Where have all the fondue pots gone?” “Who was the wiseacre who thought turmeric should be put in chocolate?” If I am designing my own Higher Power, I want to build one with respect for sass.

Besides, it is always good to get your Higher Power thinking you are charming before showing him how difficult you can be. Because if you and God moved ahead in the relationship, your crazy would begin to surface. If you were sleeping in the same house as the creator of the universe, you’d be waking up in the middle of the night to ask him what he was thinking. You’d let him get a few sips of coffee before you’d start in on him.

“Why did I become a boozehound? Was it because I had psoriasis? Was it because I had a bike accident? Or was it because I was the oldest of six kids? Was it because I came into the world this way? Why do you hate old people? You take their health, their money, their mobility, and their connection to life. You strip them down like a car stalled on the Jersey Turnpike. You seem to leave them with nothing before you tow them off for scrap! Are old people like teenagers to you? Both are so miserable that by the time they leave people are glad to see them go. Is that it? You make them so sad they’re more than happy to shuffle off this mortal coil?

“And speaking of death, is there life after death? A Heaven? A Hell? I hope the Buddhists aren’t right, and we have to reincarnate. I don’t want to do this thing twice. Once was enough.”

Then, I would get philosophical.

“Did you create us in the likeness and image of you? Or was it us that created you in the likeness and image of ourselves? Because it seems to me that we as human beings always have had the need to invent something outside of ourselves to blame or fear. Take aliens: A lot of humans think aliens will come and take over the world. But is this a way to avoid dealing with the actual evil that is right in front of us? And speaking of aliens, are there such things? Or did we make them up because we love terrifying ourselves with scary things outside our control? It doesn’t make any sense. Do people really think aliens are waiting to take over this world – especially at this juncture in history? In the ‘30s, maybe, it would have been a good time to get into the market. Right after the Dust Bowl, but before World War Two. But do we really believe that they would want this mess we created now? And aren’t we, as human beings, awfully conceited to think that aliens are looking to abscond from our intelligence? We are not a bright species, are we?”

And then my Higher Power, having a bit of trouble keeping up with how fast I was thinking, would say, “You don’t believe in aliens?”

“Not unless you think I should?”

There’d be a long pause.

“Should I? I mean, you tell me. Okay, I know. I know. You can’t say. Free will and all that, I get it. Wink once if there are aliens and twice if they are no aliens.”

“Never mind. I don’t need to know your business. Let’s keep this light. We are just getting to know each other. Nothing heavy.”

I would take a long gulp of coffee, and God would still say nothing. I hate awkward silences, and so I’d babble on.

“Let’s change the subject. How about evolution? I don’t want to step on any toes here, but could there be a deity and evolution? Could they cohabitate together? Stick with me on this for a minute. It’s been scientifically proven we evolved from monkeys, right? Right? But my question is this: At what point in the evolutionary process did monkeys become people? I know, I know. Monkeys didn’t technically become people, but there must have been one defining moment where a monkey was standing there, and he noticed something different about himself. A moment where he looked down and thought, Boy, something is happening here. He still has the prominent forehead, the shelf that sits like a ledge above his eyes – but he feels different! Maybe he was born as a monkey but identified as a human. He doesn’t have the word human in his head because he is still preverbal, but he feels different, like an outsider, so what does he do? Does he go through his whole life wondering why he doesn’t feel like everyone else? And one day, he just can’t take it anymore, and he has the urge to straighten out his legs. And he is really shocked that he can do this. And he walks around, strutting his stuff. Suddenly, he crouches back down because he is afraid that the other monkeys will think he’s better than them. To prove he is still just one of the guys, he eats his own shit. But when he does, he hears a voice in his head, not God but the first impulse of language. He prays, but he doesn’t know what he is praying to. He doesn’t have words, but he prays feelings and maybe a confusing series of impulses. Like in a series of confusing grunts and groans, he cries out, ‘Please, help me stop eating my shit and puking up my shit and then eating my puked-up shit? It makes me feel bad.’ Which would be ‘shame,’ right? The monkey feels shame. Did the monkey come up with that? Or was the shame part of humanity’s evolution? Or was it something we invented so we would rely upon you?”

My Higher Power puts down the coffee and stares at me. The monkey theory has his interest piqued.

I continue, “What if the monkey looks over and sees this female monkey staring at him. Standing there, with her paws on her monkey hips. ‘Hey fool, I’ve been standing up for years. And by the way, why have you got no pants? Get a leaf.’ And the male monkey would cover himself up because…”

“An erection. Why would an erection be shameful?”

“I don’t know. You tell me. Anyway, the female monkey was more advanced than him, his male pride would be hurt, and he’d blame his shame and bad feelings on her. Because that’s what men do when they have emotions they don’t like.”

“It’s right there at the front of the book. Do you know the book of Genesis? The first book in the Bible?”

“Yes, I know, but the older work has a lot of metaphors.”

“You and I know there are metaphors – but do most of the people who read it know that? People don’t know about metaphors. They take things literally. They really think Eve tempted Adam with an apple. In fact, did you know because of that story a lot of people didn’t eat apples?”

“Who are these people who didn’t eat apples?”

“Religious people. Back in the Dark ages, people took the Eve story very seriously, and they would only drink apples. Like apple juice and hard cider.”

My Higher Power is shaking his head like this is news to him. “I had no idea this was going on. Wow. You have given me a lot to ponder.”

In a final flourish, I take my finger to wipe the last of the milk foam from the bottom of my cup.

“Okay. Have you got time for me to tell you my thoughts on the Big Bang theory?”

I thought I was killing it in the Higher Power department, but when I called Sue to impress her with my mental aptitude, she said, “Leave it to you to create a Higher Power where you do all the talking.”

Do you enjoy my writing and would you care to support me in getting this book published?

Hey, Do you Want to Join the Club?

Want to join the VIP Membership site! You will read all my work and see all my comedy videos first. I offer special funny videos and blogs only members can see. The annual fee is $50.00 and you will get lots of great content. Join the club today!

DO YOU HAVE A STORY YOU NEED TO TELL? DON’T LET THE SUMMER GO BY WITHOUT WRITING! 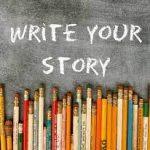 For one class only on Zoom. Safe, a lot of fun and highly interactive. You will write a lot!

If you have a story that you have written please submit and I will put you on the list of readers. 3 READERS ONLY! So register today!