Skip to content
Home/Events/Deb’s Funny Work Webinar Will Bring Your Team Some Joy!

Deb’s Funny Work Webinar Will Bring Your Team Some Joy!

Has this last while given you emotional whiplash?
Are you and your team, battle fatigued?
Would you like to thank the folks you work with?

Deborah Kimmett will talk about staying well in this ever-changing “unscripted” life and offer you tips on how to keep your equilibrium and sense of humor in these uncertain times. Guaranteed to diminish isolation and raise your team’s serotonin levels.

Check out this workplace webinar here.

“Our team experienced this webinar in early June and we are still laughing at what Deborah said.” Lorraine Elder, The Alzheimers Society.

30 minutes long, you can inspire everyone in your organization for one low broadcast price.

GRAB IT HERE AND GIVE YOUR TEAM A LITTLE JOY.

Sunday, July 26th is the Ass on Chair Story Summit-After writing the bare bones of your idea its time to shape to those stories. Take your writing up a notch and join us at the Sunday Morning summit.

We will meet on Zoom.

10:15 – people reading their material. ( the readers have beenn selected.) 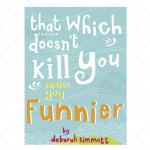 It had been a year since my divorce, but I was still walking around wearing my wedding ring. It wasn’t because of the sentiment or hope of a reunion. We had purchased both our rings at a going-out-of-business sale. I don’t believe David even wore his. But for some reason, after we were divorced I couldn’t take mine off. One morning, I finally shed it.

I was out for my walk having one of those imaginary fights, with my ex; the kind that takes place in your head, when you’re giving him hell for something stupid he did in 1985. With minimal persuasion, the ring flew off my finger and landed in a field of cows. The bovines seemed unaffected by this grand gesture, but maybe the Gods were.

For the next, while I was sure, every man alive (or nearly dead )wanted me.

Or should I say the ring finger was sure?

A guy would pull up beside me in his car, and I’d give him the ring finger and smile before the light turned green. The man could say, hi or ‘ how are you’ or “M’am, could you please step out of the car, and show me your driver’s license’ and my left hand would sprawl itself all over my cheek, showing my new tan line.

And if you think the ring finger was out of control, the thumbs went crazy too, texting anything in sight.

My friends said a ring could not possibly have that kind of power, but they had obviously not seen Lord of The Rings.

One night, I decided I had to get the ring back, but since it was out in the filed with the cows, I couldn’t start fishing in the cow patties for it.

Not in the daylight anyway.

So I waited till dark. And went out in my housecoat with a miners light on my head I started the search.

You learn a lot in a cow field at eleven o’clock at night. One: Cows hump other cows. I have no idea why. I don’t judge.

And two: whether its night or day, you will never
find a ring you that you ceremoniously tossed into a cow field.

I realized there was something about a ring that had me feel secure. If I wore, it meant I was protected. If the guy had a ring, he too was taken. That said we could laugh and flirt and it meant nothing. But throwing my ring away was like putting my house up for sale. It seemed everybody that drove by was a potential purchaser. However, there was a lot of pressure to keep your lawn cut, and the bonsai bush trimmed.
And let’s face facts, I look lived in. I don’t want to keep everything fluffed up and spotless all the time and even if I could get a potential buyer knowing my luck I got some loser who would track mud all through my house.
And I had to admit I am not good with men. I never was. It was like I had a broken picker.

The last time I was single I was this crazy twenty-five year old who dated musicians. Some drummers and flute players, a couple of roadies. Anyone in the music industry.
At 50 it should’ve been different because I had good friends who said that now that I was older I would make good choices. I wouldn’t repeat the same mistakes. Their advice wasn’t easy to swallow. Half of them were divorced. And a year later they were with some new guy who was exactly like the guy they left. They’d say, “meet Phil, he’s nothing like Bill: and I wanted to scream, yes he is.

Except for the first two letters he’s precisely like Phil.

After a few months, the tan line filled in, and the ring finger settled down. I also realized maybe it was too early to put a for sale sign up on my lawn. Perhaps I wasn’t there yet. Maybe, I was just in the process of cleaning out the closets seeing what I wanted to keep and what I wanted to throw out.

And when I was ready to entertain an offer, I am still the one controlling the lockbox.

BUY THAT WHICH DOESN”T KILL YOU MAKES YOU FUNNIER HERE

Scott White:
“Deborah Kimmett is a skilled storyteller who tickles the funny bone with this humorous look at life after 50. Each tale shows the author as a shrewd observer of the human condition with a knack for turning the oddities of life into laugh-out-loud tales that encourage us to find the grace to accept our imperfections and move closer to a state of joy in our daily lives.”
Patti McCauley
5.0 out of 5 stars Hilarious!

“Absolutely hilarious! I have read and re-read this multiple times (anytime I need a pick-me-up!) and have a copy in my spare room for guests to enjoy ( but really, they should get their own!!!) My only complaint is that it ends too soon, as I never have enough of Deborah’s humorous stories!”
Jeanette Arsenault
5.0 out of 5 stars One Funny Lady

My daughter, my mother & I LOVE this book – funny, insightful and laugh-out-loud guffawingly good. Great gift idea but you can’t just buy one – you will need one for yourself and one/more for your family & friends because if they borrow yours, they won’t want to give it back!
By Deborah Kimmett|2020-07-08T09:03:40-04:00July 7th, 2020|Events|0 Comments