Skip to content
Home/Events, funny, talks, fathers/What Can Happen When We Forgive the Past and Just be Present.

What Can Happen When We Forgive the Past and Just be Present.

This blog contains a story by Vanessa Russell and my most popular memoir writing product!!

This story was written by a writer in my Sunday morning class, Vanessa Russell. This is a beautiful story about what can happen when we forgive the past and just try to be present.

A Redemption Song; Dad, A Prince and Me.

‘Swallow, Swallow, little Swallow,’ said the Prince, ‘will you not stay with me one night longer?’ I put down the book I was reading out loud to my father Axel who was hospitalized after barely surviving months of chemo. It took me a lot of healing to be at a place where I could share space with my father while breathing at the same time. It was a relief when we finally got him into palliative care surrounded by trees and rolling hills.

Axel was a holocaust survivor forced to leave behind everything he knew and bits and pieces of himself in his beloved Gratz, Austria. My mom Lila was a different kind of survivor, isolated in an iron lung for six months after contracting polio at only two years old. My parents met at work in Montreal. Axel was a psychiatric resident and Lila a clinical social worker. To their friends, they were a vibrant couple who enjoyed hosting parties, traveling and the arts. But my parents were also two trauma survivors who came together and raised three girls.

Axel was a staunch atheist and even as a kid I understood why amidst the endless Holocaust stories and artefacts of my childhood. God or no God, there was love in my family but it chafed against the notion of people as dangerous and the world as brutal. Rage simmered in the soup of Axel’s trauma.

Some of my father’s parenting practices were inexplicable then and now. As the youngest in our family, I got stuck with garbage detail. One stifling summer day, I grabbed the trash bag and something squished between my fingers. Maggots. I flipped out. Sprinting around the house while shrieking, Axel intercepted me by both shoulders. Haven’t you seen death before, he interrogated?  My cheeks flushed and I was mortified. I couldn’t look him in the eye. I was 11 years old.

My father did read to me as a child but the books he chose were relentless demonstrations of human cruelty. The Happy Prince though stood out as different. The story begins with a resplendent statue of the prince sitting atop a hill overlooking his city.  A swallow seeking shelter rests at his feet enroute to a warmer climate before winter. The once naive prince sheltered from poverty and injustice behind the walls of his palace, is devastated now by what he sees from his new vantage point. He asks the swallow to deliver his jewels to the most disenfranchised in his city. The reluctant swallow does as he’s asked even though he fears that winter is fast approaching. Each night one at a time, he strips the prince of his jewels and gold leaves. When winter comes, all that remains is the led frame of the once glorious prince. The swallow refuses to leave his now blind and incapacitated friend whom he has grown to love. One frigid night, the swallow freezes to death and the led heart of the prince snaps in two.

The people of the city tear down the ugly statue and balk at the dead bird by its feet. Angels arrive at the city with a mission to find the most precious items to bring to God. There they find the pieces of the prince’s heart and the lifeless swallow discarded on a smouldering trash heap. My father’s atheism aside, he enjoyed Oscar Wilde’s story as a signifier of the superficiality of Victorian times. However, I appreciated the love story between the swallow and the prince and the connection I felt  between Axel and me.

It was in palliative care that I began to read children’s books aloud to my father as he became too weak to read himself. One afternoon, he invited my sister Tatiana and I to his room to talk. We found him sitting by the window with his favourite, Beethoven’s Leonore Overture No. 3, leaking from the earphones of his walkman.

Axel was tiny against the sunset through his picture window. The room glowed a soft pinky orange. He nodded toward the bed and waited for us to sit. He spoke in a gravelly voice. I knew so little about parenting when you were small. And, I know I hurt both of you in different ways. For that, I am truly sorry. Please believe that I am so proud of you. I love you with everything that is left. We stood there silent and shaken. I didn’t move a muscle. I didn’t want this moment to disappear. What a gift. The ripples of my dad’s love and compassion continue to catapult me full frontal into the calamity and sanctity of connection.

Redemption for the happy prince lay in alleviating the suffering of the people he had been blind to during his lifetime. Redemption for my father lay in his amends to my sister and me giving us a glimpse of our magnificence reflected through his eyes in spite of the atrocities he endured as a child. And, redemption for me lay in letting go of my anger and resentment in order to see my father in all his complexity. He was not merely a bully nor a victim. He was charismatic, brilliant, and funny, yet always unpredictable.

Swallow, Swallow, little Swallow. My dad rests in the low thrum of this redemption song. 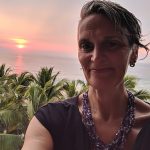 Vanessa Russell received her doctorate in Curriculum Teaching and Learning from OISE/UT and is currently enjoying “retirement” from full-time social justice research, teaching and activism.
She has enrolled twice in my Sunday Writing Sessions and we just love her contribution to the class.
Would you like to study with me? Why not try independent study? Its user friendly, loaded with great ideas and you can work at your own pace!

Would you like to study with me? But are more of the Independent type? Well here is a do it yourself six week class chocked full of the ideas you will need to get your memoirs written! This is our best selling class! ON SALE!