When Life Hands you a Suddenly

I was teaching a writing class in Mississauga, situated next to the beach on Lake Ontario. I had asked the writers to observe and write down all that they saw as if they were tourists traveling in the area for the first time. Into the wind, I yelled at them. Do not walk by the usual, like a bored teenager. Look. Really look at the landscape. Detail it. Delight. Put some sunglasses on and lather yourself up in awe; view the beach as a visitor who paid a lot of money to look at this water. As I barked out commands I saw them wandering off in separate directions taking notes and writing frantically.  The I said, add the word suddenly! All good stories start with a suddenly.  Suddenly God burps and creates a new universe.

As my students, went off in all directions I whispered gratitude to the universe. I breathed in deeply. The mother of one of my writing student’s mom had offered to host this workshop in her exquisite townhouse next to the beach. Thankfulness welled up in me as I watched my daughter, Laurel, a writer as well, sitting out on a rock looking out over the horizon; beckoning the waves to bring a story to shore.

Suddenly, the phone in my pocket started vibrating. I was annoyed because I had forbidden use of cell phones during our writing retreat. And here I was being pinged, over and over again.

I reached into my purse and fumbled for the off button thinking this is some kind of example I was setting. But as I did it began vibrating and pinging. I couldn’t help myself. I looked. There is one text after another from my brother Vernon,

I walked out of sight from the students and dialled his number.

“It’s Kevin. They got the results of the biopsy back and it’s not good.” 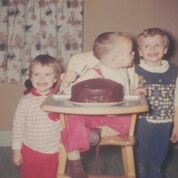 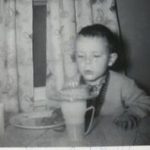 Kevin, my oldest brother, the third child in the pecking order had been diagnosed with a brain tumour. He had had a seizure a few weeks before and they sent him for an emergency tumour resection. Even though it was a serious operation the doctors came out of the surgery very optimistic. Saying that the tumour was small and they couldn’t believe they got it so early in the game. Kevin had been brought up for air during the surgery and they let him telephone his wife in the waiting room. We knew Kevin would have some deficits but everyone walked away from the surgery feeling victorious.

But now here we were:

Suddenly on this day, Vern was on the other end of the phone offering another kind of math.

I made him repeat it.

He repeated the statistics and I hung up.

The definition of irony is teaching the idea of suddenly when a suddenly of your own comes a calling.

And as happens with those painful Suddenlies, I tried to get my mind to rewind to the moment before. As my mouth was moving on, there was another part of my brain that was replaying the phone call. I am a person who doubts myself at the best of times, thinks that I am being dramatic. I was accused of this by family members my whole life. And being so “dramatic” I was doubting what I had heard. Maybe, Vernon had said 7% died and 93% lived. Or did he say, that if he lived six months then there was a 93% chance of survival? I rolled around different numbers in my head like a Rubik’s cube trying to get all the colours to line up.

In a crisis, my emotions get heightened. Impending tragedy grants me diamond sharp clarity. Usually also comes a lot of wit.

My lessons that afternoon had neon lights around them. Wisdom dropped from lips like a broken pearl necklace. I could see students nodding their heads like I was channelling God. By 4 pm it was like we had been a prayer revival and I was higher than a kite. I gathered up the materials and hurried to the car and as I clutched the wheel I let out a sigh of relief. Laurel climbed in and I was grateful I’d be able to have a nervous breakdown in the privacy of my hatchback. As I turned on the ignition, a young student knocked on my window. He wanted to bum a ride to the Go Train. “Yes, hop in.” If he was in the car, I couldn’t cry. If I didn’t cry the suddenly wouldn’t be true.

Want to be inspired and encouraged with your writing? Then join me online: http://thesevenminutewriter.com/product/write-a-better-story-online-bootcamp/