From about the age of  10 onward, I produced elaborate Christmas concerts as a tribute to the birth of our Lord.

It was the late 60’s. I was the oldest of six kids. As the self-appointed director, writer, producer, and star of these productions, my directorial style mimicked Francis Ford Coppola in his Apocalypse Now phase.

The rehearsals were fraught with a diva’s emotions. Many a night, my five brothers and sisters were downstairs in the rec room rehearsing with me screaming, “If you guys don’t get this right, Mom and Dad will walk out!” to which my sister Karen, aka the Virgin Mary, would smugly retort, “They live here. Where are they going to go? Upstairs?

She almost got recast as the Third Wiseman for that crack.

Neither she nor any of the family appreciated my unusual interpretation. I felt there had been too many productions where the Virgin just sat there looking beatific, so I rewrote the stable scene from a feminist point of view. As the plastic shower curtain opened, my sister acted out a homebirth, complete with labour pains, while Alice Cooper crooned “Only Women Bleed” on the cassette tape deck. When she was about ten centimeters dilated, she pushed the baby Jesus out from between her legs. My two-year-old brother crawled out from her skirt and said, “Me no like sandals.” Then he went and sat on my mother’s lap.

My parents laughed so hard, Dad had to take off his glasses to wipe away the tears.

And no, they didn’t walk out, but I almost did. I began crying and screaming that everybody was wrecking my creative vision. Then my mother, in her loving way, said: “For god sakes, stop your bleating and finish this up so we can have a snack and go to bed.”

(Many directors afterward would say the same thing to me).

After Mary, spent from her long stable birth, retreated; I once again took center stage with my bangs hanging in front of my eyes, sucking a piece of hair and strumming the guitar, singing, “Someone’s Dropped a Bomb Somewhere.”

As I sang in the key of off, and my mother took a moment to change Jesus’ diaper while Dad nodded off in his La-Z-Boy chair.

Do you like my videos and blogs? Do they put a smile on your face? Perhaps you’d consider giving to my tip jar  CLICK HERE

Or join my VIP Membership to read my funny stories and watch hilarious videos added monthly! Check it out here! 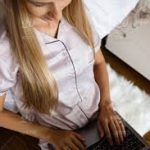 My SevenWeek Writing In Your Pyjamas, on Sunday begins, on January 16th. You will learn how to write down those stories you have always wanted to tell!   SALE PRICE NOW