The Year Billy Left Us.

This is a wonderful story by one of the writing students, Deirdre Pike in my Six Week Writing Class. She has been in my Writing In Your PJ’s. High energy, a social activist and a person who campaigns tirelessly on behalf of LGTQA rights.

She is a beam of positivity. 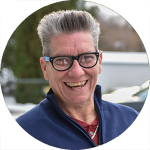 I never wanted to know who my real parents were. From the day Bill and Lucy Pike picked me up from Perth County Children’s Aid, November 23, 1962, they were my parents, and I was their daughter. The real mystery in our family was always my dad’s son.

Billy was born almost a decade ahead of me, during my dad’s first marriage, a union that ended quite quickly by all accounts. My mom, Lucy McKellar, married my dad, William Arthur Pike Sr., in 1958, when Billy was just five years old. The three of them had formed a little family in Stratford, Ontario, until I came along.

There are only two photos in my possession that prove I was not always an enfant unique. In one, I am a baby and Billy is holding my hand. In the other, we are together on the beach in Grand Bend with our nanny. These photos do not elicit any tangible memories for me, but they show I was not the only child of Bill and Lucy Pike, until I was.

On April 4, 1966, my mom unfolded The Beacon Herald newspaper, to find my dad’s picture on the front. British Mortgage and Trust, was collapsing and a few men who worked there, including my dad, a local alderman, were going to jail for their white-collar crimes. When he finished doing his first stint in the slammer, my dad was no longer welcome in his hometown, so we moved to the similarly named, but nowhere near the same, town of Strathroy. Billy did not come with us.

As I grew up, I had so many questions about the past, but would receive very few answers. Billy had been sent to his mom’s apartment in Montreal, where he lived with a different sister, one with whom he shared the same blood. When his mom became more interested in her acting career than Billy, he didn’t come back to us. My dad paid to send him to Ashbury College, a prestigious boys’ school in Ottawa. Why? Why couldn’t he live with us?

The summer before I started high school, my parents left on a month-long adventure to visit their homelands of Scotland and Ireland, and I was left on an adventure of my own to discover more about my absent brother, William Arthur Pike, Junior.

Well, not entirely on my own. There was Duffer, of course, my ever-present Scottish Terrier. We were both headed to live with our town’s version of The Brady Brunch.

Dr. Crowley and Mrs. Goudie, neighbours and long-time family friends, had each been widowed, and when they merged their families through marriage, they became one big clan known affectionately as, “The Crowdies.” The seven kids ranged in age from 13 to 30, the youngest being the same age as me.

They moved into what was a palatial home for the times and the town, complete with a pool and tennis court. Just behind the pool was a barn which had been renovated into a change house and party room, with bright green astroturf resplendent throughout.

While Mrs. Crowley taught me how to play tennis that August, the older ‘Crowdies’ taught me how get high and listen to the right music for a budding teenager in 1976, like Chicago, Genesis, and Supertramp. But the best part of all, was learning more about Billy.

No one there seemed upset when I asked questions about him, unlike at home. The older kids had remembered him visiting us when we first moved to town and some had even seen him just a few years back on their class trip to Ottawa, working at the Royal Canadian Mint. I walked around like Harriet the Spy, making notes about the bits and pieces of Billy’s story that escaped the mouths of those in the know.

When my parents came home on Labour Day weekend, they came home to a different daughter. That month, I had seen what it was like to live in a big family and I longed for that. I had all the love, but I longed for a sibling, my brother, and from all I had learned, it felt like it was my fault he was gone.

Deirdre Pike’s fascination for sharing stories drives who she is and what she does as a senior social planner, a columnist for The Hamilton Spectator and as the Justice and Outreach Consultant for the Anglican Diocese of Niagara. She lives with her partner, Renée, and her cat, Shazoo, in Hamilton’s Strathcona Neighbourhood. 50

Want to join my membership page? For an annual fee you can get all the latest videos and blogs. Plus support my writing and performing. Check it out here.

Summer School You Will Love!

One Pop Up Memoir Writing Class.