Skip to content
Home/Creativity in your writing, Events/What Happens When a Comic Walks into A Sex Club!

What Happens When a Comic Walks into A Sex Club!

I was teaching a writing workshop a few years ago and when we were on our coffee break I asked one attendee what she did for a living, to which she replied, “I own a sex club.”

This was not an answer I was expecting. Especially from this particular woman. I don’t know what I thought a sex club owner would look like but she was not it. She looked like a librarian.

Immediately, I had to re-adjust my expectations of where this conversation was going to take me. I put on my ‘ pseudo sincere’ face.

It’s a look I stole from my therapist who, no matter what shocking things I told her I had done, would look at me non-plussed. I could tell her, “I killed my boyfriend and cut him up in tiny pieces and put him in a freezer,” and she would put a finger to her lips and nod her head and say, “I see. I see.”

For me this look does one of t two things:

1.) It gives me time so I can figure out what I feel or think.

2) It helps me check in with my reality. As a comic, I know I make shit up.

I was not making this up.

We were standing next to the coffee station and she was picking raisons out of her bran muffin. (Yes, I remember what kind of muffin she was eating.) She told me that this club which was located in Toronto was a safe place where  members would come to have sex with people they just met. I would have called this the ’80’s. People came to her place regularly. It attracted a variety of clientele from different walks of life who used the sex club to unwind. Some people like to watch and others liked to be watched. Some came as a date night. Others came in in on their lunch hours of after work for a “real happy hour”.  Most people walked around naked. Most people had fun.

After all who doesn’t like sex, said the muffin lady.

As she droned on, my brain tuned her out. I was off to the races wildly trying to land on what opinion I had about said club. My left and right brain were having a war. The left side was saying it’s no worse than going into a bar and picking up a stranger. The right was screaming, how could you have sex, sober with someone that you just met?

Plus I had so many questions. Why do you have to be naked? Where is the mystery in that?

An old joke my father used to tell came to mind: “Two guys were looking over the fence at a woman in a nudist club and one guy said to the other, ‘Wouldn’t you like to see her in a sweater?’ ”

And, what if you got to the club and realized you weren’t in the mood, would it be kosher to say, “I’ve got a headache,” or would your membership be revoked?

And what exactly would the initiation into a sex club be? Would you have to be able to fake a good orgasm?

I hear her say, “One of the more popular rooms is the Shaggin’ wagon.”

When I was a teen, I got ‘it’ on in a van but my body was young and agile then and the farthest I ever went were activities where I kept my blue jeans on.

Then the next thing she said was, “There are a lot of older men there, too,” What did she mean by that? I didn’t know if she was insulting me or thought this would be a selling feature for me.

Left and Right Brain Together: That’s why older people learn how to play bridge.

She continued, “You should come in and check it out sometime. I could leave you a pass.”

“Oh God no!!” Was I yelling? “No. No. No. See I am a prude. I am not ashamed of my complete closed off sexuality. I even close the blinds when I watch Sex and The City reruns.”

“OH GOD! NO!!!!” Yup. I was yelling. “There isn’t enough Purel in the world for me to ever have group sex. I’d be walking around spraying Clorox bleach on people while they were “getting it on.”

“You’re funny. Maybe we could hire you to perform.”

“Me? Are you kidding me? Me in a sex club?  That’s hilarious.” I started laughing, so hard. I could just see it. Instead of me picturing them naked they really would be naked.

This conversation happened years ago and is still cracking me up a decade later.  In fact I can lie in bed and write this blog and I still get as much entertainment value from thinking about me walking into a sex club, as I would have if I had actually gone in.

I still marvel at how she took her job so seriously. The way a good sex librarian would. She didn’t crack a smile. In fact, when I said I’d never perform in a sex club, not even if Hell froze over, she put her muffin down looking rather hurt.

“I was serious. There is nothing shameful about it. ”

My face went neutral. I put on my face. I put my finger to my lips and said, “No. No there isn’t.”

“You better not tell anybody this,” she added, not remembering that something called Google had likely already heard of her.

“No. No. Mum’s the word.” As she walked away I picked up the muffin wrapper, ate all the raisons she’d left behind.

Need some laughs? Come see me perform. My new show is called: 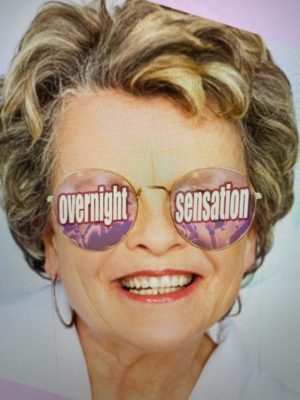 It will be taped on May 1st and 8th!! It’s about mothers and daughters and what we inherit and what we forgive. Please come and see this show! Click here to grab a ticket before they are gone!

Not in Toronto grab video and audio excerpts here by joining by annual VIP subscription. You get laughs and I stay off the street!