First off, the next Six Week Writing Session begins this Sunday. We have 3 spots left. And honestly, it’s going to be so much fun.

Secondly, this year I’ve decided to feature some of the guest student writers from my online Writing Classes.  Why? Because some of these stories are so good!  I don’t know if it’s COVID and people have more time to perfect their writing but over the past nine months, students are upping their game. This story is written by Alana Shields. (Social Coach) Plus she and I worked at The Second City and have been long-time friends) 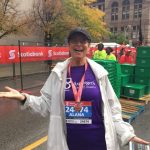 And as you shall see, she is also a delightful writer. This story is about the actress Sandy Dennis,( star of Splendour in The Grass, and Who is Afraid of Virginia Wolfe)  too many cats and an actress who puts her foot in her mouth!

The Linen Closet. ( by Alana Shields)

“Why the hell did I open my mouth?” I pounded the steering wheel with both hands and squinted into the brights of an oncoming car.  “I could have said anything else” I was going 90 in a 60 zone, burning up the Connecticut backroad, just anxious to get away from the weekend. I tapped the brakes lightly. Damn linen closet.

I’d heard about the Linen Closet Wars from Sandy Dennis a few years before when we acted together in a Neil Simon play at a snowbound dinner theatre.  She was the star. I was in the cast. Years before, we had all loved her in “Up the Down Staircase” and “Who’s Afraid of Virginia Woolf?” Like so many other talented ageing actresses, her career slowed as the parts became less frequent.  So here we were in Edmonton, giving our all for comedy while people ate their roast beef and asparagus salads. The play was “The Odd Couple”.  The other half of the Couple was Stella Stevens, Sandy’s opposite offstage and on.

Sandy was well-read and smart.  We made each other laugh.  When she laughed, her eyes crinkled up till they disappeared and she would emit a hiss of air through her huge teeth, followed by a generous guffaw that filled the room.  Sandy loved laughing almost as much as she loved pepper vodka.  I was still pretending to be a social drinker at that point and all bets were off when Sandy was pouring and the stories began.

The Linen Closet story was my favourite.  When Sandy was home between acting at dinner theatres or occasional movie shoots, she folded her sheets and towels, still fresh from the clothesline and sea breeze, into neat thirds and stacked one on top of the other, in order of colour, in her linen closet.

Her mother Yvonne, pronounced Eye Vone, would then secretly fold those same sheets and towels in quarters and restack them according to type, sheets with sheets, face cloths with face cloths, and so on. This went on for years.

When Sandy first discovered this, she simply refolded the items and replaced them in their matching colours. But it happened over and over again. Eventually, she couldn’t pass the built-in closet without opening it to find Yvonne had been at it again.  She became used to just stopping to refold the linen. If the cats needed feeding or she had guests coming for dinner, she hurried on by, but she would always know when her mother had been in there.

The moon overhead was almost full. I sped past a gas station even though I should have stopped for a coffee to help me sober up.  Why? Why did she even tell me that linen closet story if …?  I tapped my brake again though I couldn’t wait to get out of Connecticut.

To be clear, it was Sandy’s closet.  She had purchased the large Cape Cod house by the sea in Westport twenty years earlier.  It was her haven, literally called Seahaven.  Over the years it had become a getaway for her friends and the strays she gathered up.  As her career slowed, she spent more and more time there.  If she minded she never said so.  It suited her. When her mother Yvonne was priced out of her brownstone rental in midtown Manhattan six years later, Sandy had invited her to stay at Seahaven for a while.  She did and never left.  Yvonne ran the house when Sandy was away, keeping the lights on and the animals fed.  The animals were 33 cats, two chocolate labs and a cockatiel named Baby.

Sandy and her mother had stopped speaking three years before she told me this story when Yvonne broke up with her most recent boyfriend, the last in a series of four.  Lars was a sculptor, a Nordic James Dean who moved like liquid smoke around the property doing maintenance jobs in exchange for rent.  Lars could have been 25 or 45, but he was definitely younger than Yvonne at 74.  He had moved into Seahaven with Yvonne and Sandy let him use the old barn as a studio to create his seven-foot-tall fibreglass snail sculptures. Yvonne announced one breakfast that Lars had to go and Sandy should tell him he had a week to move out.  Sandy announced back that she would not do that and, instead, offered him a home in the barn studio for as long as he needed it.  He fixed it up and never left.  When she was home, Sandy took dinner out to Lars at 6:30 every evening.

I was excited and surprised when I got Sandy’s invitation to Seahaven for a weekend with some of her friends. I hadn’t seen her since our Edmonton days but we had stayed in touch by phone. I rolled into her driveway as the late afternoon sun was coming out.  Sandy hurried out the front door with her two eager labs, welcoming me with a huge hug. She showed me around her sprawling property and inviting century home.  As she led me to the room at the end of the upstairs hall, I was positive we passed the infamous Linen Closet.  My room was bright yellow and beautifully decorated. It overlooked the seashore in the distance and the lovely Lars in the foreground.  I wondered if I would get to meet him.  When I opened my door to join the others downstairs, there she was  – Yvonne, standing at the linen closet, hastily refolding some taupe towels into precise quarters. I hid till she was done and, before I ventured downstairs, quickly checked the closet myself, not knowing what I was looking for. It smelled of bergamot and old wood. A warm glow washed over me at having this little slice of Sandy’s life for myself.

Over cocktails, everyone lounged comfortably around the living room.  Everyone else seemed familiar with the room. It was formally casual. Overstuffed chintz-covered couches and chairs. Overflowing bookcases displaying a variety of Sandy’s mementoes and tchotchkes from over the years as well as favourite books. Two Tony awards sat on top of Moby Dick. I’m not sure where her Oscar was.  Before dinner, I drank in discussions about authors and actors and, of course, cats. Various cats lounged on the furniture, draped over a guest’s leg or stretched out on the back of a couch. At one point, when I moved to sit on the floor, I heard a wheezing sound beside me. Sandy crossed the carpet with a Kleenex saying “That’s Roger.  He has allergies”.  And then she blew the nose of the cat sitting on a chair beside my head.

Sandy’s cooking was delicious. There were discussions about which ingredients came from where and what the director taught her how to make the perfect martini.  After dinner, there was more lounging and wine-soaked banter. Yvonne was sitting in a corner, reading a Margaret Drabble novel and offering the occasional witty bon mot to the room.   Feeling at the top of my after-dinner game and wanting to hold up my end, I jauntily asked “So who controls the linen closet this week?”  Conversation raggedly came to a stop.  My words were suspended in the air, hanging like a jagged mist from my breath on a frosty morning.

Yvonne was shooting daggers with her eyes at Sandy.  Who looked at me quizzically as if to say “Really?”  The rest of the guests looked at each other like surprised birds. My chest gripped and I suddenly felt cold.  My brain scrambled for new words to make it better. But I didn’t understand what was wrong, so no words came.  Yvonne loudly closed her book and left the room. Roger wheezed in my ear and after what seemed like a couple of weeks,  someone else in the party deftly pivoted to the amazing towels she had gotten in Turkey last year.

I probably should have stayed till morning.  Thankfully I hadn’t unpacked and, later that night when I was sure everyone was asleep, I made my getaway down the creaky oak stairs in bare feet. I held my breath till the back door clicked behind me. The night air felt fresh on my hot tired face. When I turned the key, my cranky old Fiat revved loudly.  I knew Sandy would probably wake and hear it. She was a terrible sleeper. The tires crunched over the gravel as my car crept down the long driveway and away from Seahaven.  Away from Nordic boyfriends dragging giant snails around, away from scowling mothers who hate change and, finally, away from Sandy and her damn linen closet.

I squinted into the moonlight and pointed my car homeward.

Do you really want to write your stories?

Then what are you waiting for? Sunday the Writing in Your PJ”S Session begins. And the time is now.

We have beginner writers and ones who have studied with me for a few years. Whatever level you are at, I can guarantee you will learn how to get your good ideas down on the page. You will have a toolkit of tips you can use long after the class is over.  It’s fun and safe and you will be encouraged by me and a community of like-minded people. Sign up Today!