Skip to content
Home/Events, Humour in Your Writing./Wigging Out: A head injury had me bald in Grade 9.

Wigging Out: A head injury had me bald in Grade 9.

Why would someone wear a Wig to high school? Well I fell off my bike at age 13 years of age. I was pedalling hard, way ahead of the pack. In my mind I see me bragging about something, my hair flying like the wind and then I remember nothing until the following  Thursday. My sister was behind me at that time and say she saw me start to tumble  but I didn’t do anything to break my fall.

All I know is four days later I came to in the hospital.

Apparently I was throwing up and dizzy. But a nurse there kept insisting  there was nothing wrong with me so my Aunt Colleen, stepped up and said “Get a doctor in here right now or there will be hell to pay.

A surgeon miraculously appeared and within minutes said, “Get this girl to surgery.”

It wasn’t technically a brain injury. It was a sub cranial bleed. I like to stress this to make sure people know I don’t have a brain injury. But it was serious enough that if they hadn’t operated I would have been dead within hours.

When they removed that bleed, a blood clot they cut across the top of my head, so I wouldn’t have a scar on my forehead. As a result  the blood pooled around my eyes, so when I came to on Thursday my lids were swollen shut.

I remember waking up, head hurting with someone praying over me. The shadow of a man bent in and made the sign of the cross on the forehead. It was our priest. I winced. When you wake up after an accident and see a priest praying over your bed its not comforting.

I was in a private room, with no buzzer. I had a bell I was supposed to ring, but after doing that and yelling out for help I finally walked to the bathroom on my own. When I came back I saw a bag taped to the bottom of the bed. I looked in it and it was full of hair. My hair. I remember running my fingers through it and feeling confused by why it was in a bag. What was I supposed do with it? Make a wig? Knit it into a sweater?

Touching my head swaddled in white cloths and realized underneath the bandages was a bald head.

My bald head.  A bald head were going into High School 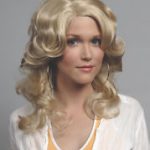 Let me just say, in 1970, bald-heads weren’t acceptable fashion statements.  Sinead O’Connor hadn’t arrived on the Napanee scene . If this had happened today, other kids would have shaved their heads in solidarity. They would have done henna designs on my baldpate. Or someone would have started a Gofundme to help me raise money for me to Buy a wig. The make A Wish Foundation would have taken me to me backstage of the musical Annie where I could have had my picture taken with Daddy Warbucks.

Instead Mom and I went to Sears to purchase hair. She wanted me to buy something short and perky. Something with good taste and suiting my age. A totally reasonable request but I was 14. I wanted long hair like the hair that was like the hair in the paper bag. After much deliberation I picked an ash blonde polyester wig with down to my shoulder. It was a cross between what Farrah Fawcett and Dolly Parton would wear.

When I came out of the change room mom gasped. “Christ on a cracker. You’re going to stick out like a sore thumb.” ( The following she suggested I wear one of my brothers hockey helmets to the Napanee Fair because she didn’t want me to get hurt my head on the Tilta Whirl. )

So off the wig and I went to Grade Nine.

A minor niner with a wig that needed a postal code is a gurantee for fitting in with all the cool kids.

Every single day at school, someone would ask me if I was wearing a wig. Everyday single day I would say “ No. No. This is not a wig.”

And then there was the school bus.

Every single day kids laughed and made fun of me. Every single day one jerk in particular would try to pull it off. He was one of those simpletons that always have their mouth hanging open like they just said oh my God. And he had a twin. I think the two of them were sharing the same brain brain.

Every day he crawled up behind me and thinking I couldn’t hear him.

And I would put both hands over my head.

And every day I got off the bus crying.

It was hard because I liked boys attention.  Why couldn’t someone like Mike K like me. Mike K the guy who sat beside me in homeroom. He was the kind of guy you’d love to attempt to  pull off your wig.

The kind of guy I’d bite my nails for.

Mike was introverted. Okay, stoned. He would smoke up and then come to class and squeeze white glue on his palm and watch it dry.

Sometimes he chewed the ends of his hair so there was always a wet lock stuck to his face. Every day the wig and I stood beside Mike at his locker. And practiced my hello.

I fantasized all the time about Mike.

Mike kissing me.
Mike putting his hands through my polyester hair. And if his passion got the best of him and he accidentally knocked off the wig, I knew he would look at that beautiful bald head of mine and ask me to the prom anyway. I would make us matching outfits. I’d macrame  myself a halter top and him a matching cowboy vest.

We would get married at the Sadie Hawkings Dance. Then I get him off drugs. And he’d fight me but I would be strong and he’d get his one month chip at a 12 step program and tell people how I saved his life.

This speaks volumes about my low self esteem, which was further shattered by the fact that Mike never noticed me.

Mike didn’t know I had hair or not because Mike never looked up from his hand.

The only guy who seemed to know I was alive was the idiot on the bus.

Those days I didn’t tell on people. I would never go running to my parents. I am sure they would have argued to buy me a short bob.

The one person I did mention it to was my Grandma Brady. Grandma wore wigs for no good reason.

Hot pants, white shoes and a wig to church.

For years had dyed her hair black and when she couldn’t afford that she used to spray temporary black dye in her hair. You didn’t dare borrow her hairbrush. Finally she gave in and wore wigs. If you went in her closet there would be wig heads in there staring at you.

To Grandma my big Farrah Fawcett wig, was not too much for her. It was not enough. I showed no one my bald head. But she would let me wear of her wigs and brush mine out. She’d tease it. Make the hair bigger and puffier than it already was.

When I told her about the douche on the bus,

“ You know what you need? A purple scarf.” I didn’t see how a purple scarf was going to make me blend in.

She pulled out a purple scarf around my hair and tied it at the back and then took the two ends and pulled them around my chin and told me to hold on tight.

“When that little bastard goes to pull it off, you hold on tight.”

Then she winked. I don’t know what the wink was for but it a strange feeling. A feeling of power. Like we were just two gals who knew what was going on with the world. That the two of us were beating people at their game.

The next Monday wig and I got back on the bus. Sporting purple hot-pants, black plastic boots, mascara that made me look like ants were crawling under my eyes and to make top it off I had borrowed some of grandmas’ Fancy Kmart costume jewellery.

I sat down, grabbed the tails of the scar and wrapped them around the front of my neck.

For the next 6 months I held on for dear life.

By March break, the hair was coming in like peach fuzz. And my aunt asked me to come and to help her take care of her kids. I washed my new freshly grown in hair thinking if I washed it would grow faster. I put Sun In to bleach it as it had grown in dark.

By the time the break was over, I could back to school au natural but the wig and I had grown close. It was better than a hat. I felt naked without it. Maybe like a nun felt when they told her she didn’t have to wear a habit.

I went back to school with it on my noggin. And you know who was on the bus waiting for me. When I sensed him right behind me I turned around and said, “What?”

He stuttered a bit and laughed with his buddies, “Is that a wig you’re wearing.

Knowing I had a full head of hair underneath I told the truth for once.

He looked at his friends. They dropped their heads and he mumbled, “Nuthin’”, I glommed onto with my eyes. I didn’t break my stare.

And he can’t stop looking at me either. He said, “ What ? What?” Then I winked at him and he turned red and then went back to his friends and that morning at my locker I said hi to Mike who looked up from his hand and said, “ Hey did you get your hair done?

That night I took the wig out to the burn barrel and torched it up. As the polyester sparks blew off into the night I realized I knew two things to be true; Grade nine boys are idiots and everything grows back,  eventually.

Let me know what you think and comment below!!!

This is an excerpt from my new book: Window-Shopping for Good!

My work is entirely funded by my readers – by you – to keep this a community-driven advertising-free collective space. If you like what you read each week, if you find solace or inspiration in these words, or if you just appreciate the occasional pep talk, consider making a small contribution to keep the art alive. Donate here: